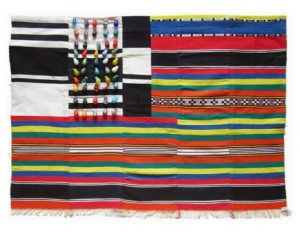 “Muriel Stockdale is a British-born visual artist and theatrical designer who moved to America in 1967 and currently lives and works in New York City. One of Muriel’s recent projects, entitled “E Pluribus,” is a series of flags exploring the concept of “patriotism” in the United States. The flags are handcrafted in mosaic tapestries to represent how a diverse nation like America can co-exist in peace and harmony. Muriel has been working on her series of American flags since 2003 and is always expanding the project to include others.

Muriel was an instructor at New York University’s Tisch School of the Arts as part of the Graduate Design Department.

Aside from visual #Art, she has worked as a set and costume designer in the theater since the 1970s. As she became more comfortable in theater, she began directing and writing. In fact, she has even written and produced a short film titled “New York City Spirit.” Over the course of thirty years, Muriel has lent her talents to film and television; providing costumes for “One Life to Live,” Law and Order” and other hit shows from top-rate companies. Perhaps most impressively, she has spent more than twenty years working with Jim Henson Productions–the company behind “Sesame Street” and “The Muppet Show ‘”–building and designing costumes for puppets and people. She has also penned articles for magazines such as “RaveSQ” and “The Independent.”

Aside from her “E Pluribus” flags, Muriel recently completed a novel titled “Gabriel Born” and was invited to create a large diversity flag for a temporary installation at 3 World Trade Center.

Muriel recently discussed her projects in an exclusive interview.

Read the interview at blastingnews.com > 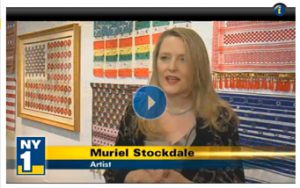 The Art of Muriel Stockdale: Flags and Affirmation

At first glance, each work of art seems to be an American flag: one rectangle in the upper left hand corner of each piece constitutes the “star field” and the rest is the thirteen band “stripe field.” In fact, they are all American flags, yet each is unique and individual, dense with symbols and echoes of cultures from all around the world.”

Betsy Ross and Muriel Stockdale have two things in common, creating flags with the hope of bringing a nation closer together.

Stockdale’s E Pluribus is a United States flag series, which expresses the many colors of patriotism found everyday in the United States.

“I started making the flags in 2003,” Stockdale explained. “When the pitch for war happened, everyone had their flags out showing support, everywhere. As an immigrant, I felt very uncomfortable about it because it seemed to me to only show a limited perspective for what the United States stands for.”

An immigrant from England, Stockdale takes great pride in being an American. She just shows it the way America is supposed to be seen, she said, “multi-colorful.”

For the 10th anniversary of September 11, 2001 attacks, Stockdale is working with Charlotte’s Place, a community center opened by Trinity Church to create a new flag, “OUT OF MANY, ONE” to pay honor for the tenth anniversary of 9/11. She is accepting hand tracings from people of different cultures to construct a flag about 12 feet wide. “I wanted to make a big community flag,” she said.

Over 500 Long Island residents lost their lives during the 9/11 attacks. The 344 Nassau residents and 178 Suffolk residents who died are honored at separate memorials in each county.

“When I started making the flags, people stated to respond to them.,” she said. “People understood the idea right away and really appreciated it. Patriotism is much broader and deeper and multi-colorful than just the militaristic idea.”

The mission of E Pluribus is to speak out and celebrate diverse America and especially to point out equality within gorgeous difference of expression, she said.

“The fabrics represent that culture. Bamboo from Indonesia or African fabrics, or Japanese papers,” said Stockdale. “They expressed the idea for the idea. Open and welcoming space for people of all stripes.”

It is not too late to get involved. For those interested in being involved in OUT OF MANY, ONE, go to E Pluribus website and download a submission form.

Artist Muriel Stockdale, creator of E Pluribus – Art Flags that celebrate diversity is honored to continue showing at Charlotte’s Place (109 Greenwich Street above Rector Street). Stop in weekdays between 12 PM and 6 PM to see them and the 13 by 8 foot community flag – Out of Many, One which a public art project created to honor the tenth anniversary of 9/11.

Hundreds of hands from around the world are linking for an international commemoration of 9/11.

Artist Muriel Stockdale’s “Out of Many, One: A Community Art Project,” is a project to create a 12-foot-wide American flag out of pieces of handprint-covered fabric sent by participants from around the world.

“E pluribus, meaning “out of many,” exemplifies the many different perceptions of the American flag through the eyes of different cultures. On Nov. 10, Muriel Stockdale, the artist who created these flags, offered students and faculty an explanation of the flags origins.”

“Fabrications” at the Newport Mill, 2010

“‘This exhibit of flags that represent this wonderful country are also so much in line with LaGuardia Community College being a tremendously diverse institution, one of the most diverse in the country with 160 countries represented and over 110 different languages spoken on campus,’ said E. Ramone Segree, Vice President for Institutional Advancement”

“E Pluribus artist Muriel Stockdale chose Queens to display and discuss her artistic and visual representation of the cultural diversity found across the United States using hand-made American flags from fabrics indicative of their different cultures.”